Coyotes in Clarendon Hills? Yes
Over the past several years, coyote sightings have become more prevalent within the village and surrounding communities. Although you may be shocked to see a coyote running through the village it is not unusual. Due to the rapid loss of habitat by development, many coyotes have found themselves forced to cohabit with humans.

Where do they live?
Coyotes are typically found in bushy areas, wooded edges, and open grasses - they are not found in heavily wooded areas, as many people believe. They also can be seen occasionally walking down a village street. Coyotes like to travel along trails, paths, and waterways. They are most active at night, but are often seen during the day, especially in the summer when their pups are more active. Coyotes sometimes hunt in family units but often alone or in male/female pairs. They do not form “packs” like their wolf cousins. 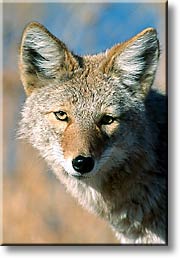 What do they eat?

The diet of coyotes consists of mostly small mammals including mice, rabbits, and moles but will also eat fruits and vegetables, especially in the fall. Coyotes rarely kill prey larger than themselves.

Do they attack humans?

Statistics from the Illinois Department of Natural Resources call attacks on humans extremely rare, with only 16 documented cases in all of North America in the last 30 or so years. The majority of these cases occurred when people tried to hand feed the animals.
Coyotes have a natural fear of humans and will be less likely to approach a pet which is secured to a leash with the owner present. Residents need to keep their dogs on leashes and supervise them when they are outdoors at dusk and after dark, and keep their cats indoors.


What should I do?

Following these simple precautions will reduce the risk of a coyote or other wild animal to prey on your pets.

According to Bob Bluett from the Illinois Department of Natural Resources, trying to reduce and “control” the coyote population (i.e., create a “vacuum”), will not work. He states, “Coyote reduction has not worked in about 250 years and it’s not likely to work now or in the future.” He states that, ‘holes’ created by an animal’s death are almost always filled within three to four weeks, thus, attempts to keep coyotes out of an area must be intense and unrelenting.” The Village of Clarendon Hills does not participate in trapping of coyote in and around the village.


You can find out more from the Forest Preserve District of DuPage County at https://www.dupageforest.org/plants-wildlife/wildlife/living-with-wildlife/coyotes